At a recent presentation to SRS, Richard Dunhill of Samaritans said from time to time people in support and counselling roles may also need to talk and he extended an offer to all SRS counsellors that they could always contact the Samaritans help line if they, themselves, needed to confidentially down load. Call free 116 123 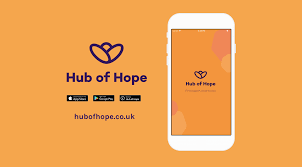 Here is a link to another life saving app https://hubofhope.co.uk

Here is a life saving app for mobile phones and tablets. It is available 27/7/365 and provides links to immediate help in your area.

A joint fund-raising lunch was held on Sunday 16th June at the fabulous venue of a marque at Sutton Grange courtesy of Clive and Diana Bennett. The event raised just over £2000 which was split equally betweenSt Peter’s Church, Stoke-on-Tern and Shropshire Rural Support (SRS)

Simon Latter,Chairman of Shropshire Rural Support, welcomed over 140 guests as they sat down to a convivial lunch. After lunch there was a Promise Auction and a Raffle. The auctioneer presiding over the Promise Action was SRS stalwart Roger Parry and the items included:
Two night’s stay in a Shepherd’s Hut
Two coarse Lunch for 4 at the Wharf, Goldstone
One day’s hedge cutting
Two hours agronomy plus 2 bags maize seed
Celebration cakes
One lamb-freezer ready (from September)
Hawk Walk at the Falconry Centre at Battlefield 1403

The Raffle was arranged by SRS Co-ordinator Ruth Hughes and her family and its success was assured by the generosity of all those who donated prizes including:
NFU Market Drayton
Belton Cheese
Lambert, Leonard & May
Pickstocks, Telford
Derek Harper & family
The Wharf at Goldstone
John Hughes
Dave Harris (BCW)
Diana Bennett
Battlefield 1403

SRS is a self-funding charity, totally reliant of the support, both financial and practical, of individuals and organisation. It is only through this generosity that SRS is able to deliver the much need support to the rural community, and particularly farmers, in Shropshire. The event was such a success only due to the support and generosity of all concerned to whom SRS are indebted.

After many years of very dedicated work Brenda has retired as Co-ordinator for Shropshire Rural Support and Ruth has taken over the reins and is the person waiting to take calls from Shropshire farmers, their families and rural people needing support in times of crisis.

Firstly, a very big thank you to Brenda from the Trustees of Shropshire Rural Support, a thank you that will be echoed across Shropshire by the many people she has helped and supported over the years.

Secondly, welcome to Ruth. Ruth takes an active part in the family dairy farm and with a background in agriculture and working in the community, brings extensive networks within the NHS and Shropshire to add to the already well-established networks of Shropshire Rural Support.

Key to the service Shropshire Rural Support provides are confidentiality, the time to listen to people’s concerns and to be able to sign post, when appropriate, to expertise and specific service providers. Supporting Ruth is a pool of counselors with agricultural back grounds.

For more about Shropshire Rural Support and how to contact go to www.shropshire-rural-support.org.uk, www.facebook.com/ShropshireRuralSupport or call Ruth on 0300 123 2825

John Chesters should be recognised for his immense contribution and dedication to agriculture and rural life in Shropshire.

John is well known and respected by old and young for his tireless work with Nesscliffe YFC as an advisory member with particular interest in the financial health and prosperity of the club. He has helped successive young treasurers to present accounts and ensure Charity Commission returns are correctly filed.

Perhaps less well known, is the contribution that John made to Shropshire Rural Support and an annual event known as Crucial Crew. Both roles were largely unseen and went un-thanked by many local people but had the potential to save and improve lives.

As a trustee of Shropshire Rural Support, John was both a key fund raiser and guiding authority in the confidential work of the charity. Although Shropshire Rural Support works closely with the Farm Crisis Network, the decision to maintain an independent charity to address rural stress and misfortune requires people like John to quietly and carefully guide advisers and staff, as well as maintain the awareness of others to the availability of help. Others will have greater knowledge of John’s contribution and I would wish to whole heartedly support their submission in respect of this work.

I am particularly aware of John’s fantastic work to improve farm safety awareness through the Crucial Crew event held at MOD Nesscliffe each year. The event comprises a number of scenes depicting potential hazards that school children may encounter in their daily lives. Scenarios such as substance abuse, domestic fires, building sites and farms are created to raise awareness of dangerous circumstances that could cause injury and to promote avoidance. John delivered the farm based element over the two week annual event for countless years, and has co-ordinated the whole of the agricultural scene for at least the last five years. The thousands of children that John has engaged in this way will probably never fully appreciate the life skills that they have learned but I am sure that John would feel that if only one young life is saved, then his efforts would have been entirely justified. John was also be aware that, through children, parents can learn lessons that will encourage improved health and safety on farms. This really is crucial work in a rural county such as Shropshire.

I am sure that others will have their own memories and will wish to send their condolences to Helen.

The Campaign Against Living Miserably (CALM) is an award-winning charity dedicated to preventing male suicide, the single biggest killer of men under the age of 45 in the UK. In 2015, 75% of all UK suicides were male. For more detail go to CALM website

Shropshire Rural Support attends a number of country shows and events over the summer months. If you would like to call in a hear more about our services, here are the venues and dates:

Burwarton Show – Thursday August 4th. We will be in the NFU tent.

Minsterley Show – Saturday August 20th. We will be in the NFU tent.

We find this an ideal informal way for people to sound us out. This might be when thinking about how to help a family member or a friend.

Loneliness due to isolation & lack of social interaction is as serious as smoking to our health.

Research suggests that a sense of isolation can have an immediate, measurable effect on physical health, causing higher blood pressure and stress levels, depressing the immune system, disrupting sleep, encouraging overeating and alcohol consumption, and leading to an increased risk of Alzheimer’s.

In rural areas isolation is all too common & this is why Shropshire Rural Support is campaigning to help reach sufferers in our county.

What can we do about it?

Loneliness can be an easy thing to fix – it is just a matter of connecting people.